The Vaccine Discussion is Revolving Around the Wrong Goal

Here in the United States every adult who wanted to get the covid injection has had the opportunity to get it and has most definitely gotten it by now, and the opportunity is still there for all the people that haven't gotten it if they decide to change their mind. There are so many covid injections floating around this country that we have started to give people their fourth doses of a two dose vaccine and have also begun giving them to children whose risk of dying from the stupid virus is lower than their risk of dying while their parents drive them to school. Considering this, along with the fact that studies show that over 80% of Americans have covid antibodies whether from infection or injection (it's sad that the news hid this), getting more Americans vaccinated shouldn't be the world's biggest priority right now, nor should it be America's.

Sadly, due to propaganda, a considerable chunk of Americans, including those in power, don't see that and do believe that vaccinating more Americans is our country's biggest priority so they're trying to figure out how to force the unvaccinated to get the injection while the sane people in the country are fighting these peoples' mandates (as they should). Things have gotten crazy, the definition of anti-vaxxer has changed in the latest version of Orwellian newspeak, people are losing their jobs for no good reason, and the whole country is being torn apart.

But you already knew this, and I don't really like making you read about things that you already know, so instead I'm going to take this discussion somewhere I haven't seen a single American take it, and as someone who consumes much more anti-vax and anti-mandate content than the average person, and as someone who wants those other people to finally feel comfortable going outside again, it is quite saddening that we aren't talking about this in America. Since we have gotten to the point where everyone here who wanted the injection have gotten it then we should be focusing on vaccinating the rest of the world.* (Thanks to the Hated One for bringing a thought that has popped into my mind a few times into a more prominent spot)

Where do new variants come from?

The Omicron variant is the most unique of the corona variants, not only because it is significantly more mild than the others and poses little threat to nearly everyone, but because it is the first variant that has come about since the vaccines have been widely available.** If the theory that mass vaccination prevents the development of new variants is correct then how could this have happened?

The Omicron variant was discovered in South Africa on November 24, 2021. What percentage of people in South Africa had gotten at least one dose of a corona virus vaccine on November 24, 2021? 28%. Do you see the problem? At the same time that Americans and people from other rich nations were celebrating their own high vaccination rates, a new variant came out of a place that they completely ignored. 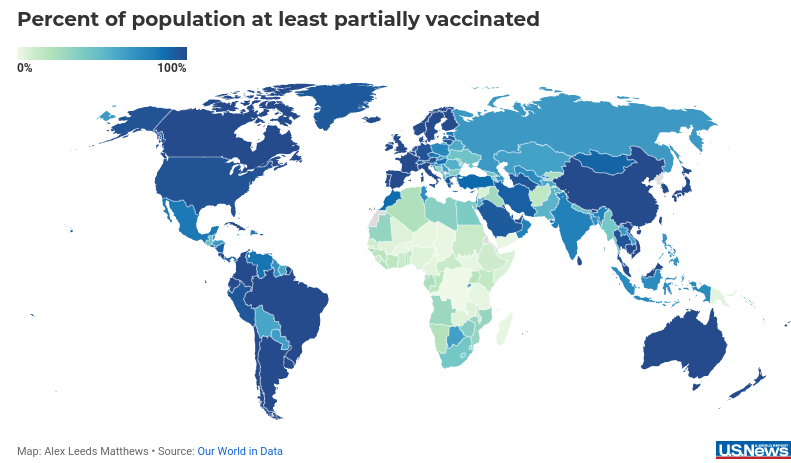 Today Americans are freaking out about states with low vaccination rates. When it comes to vaccination Idaho is the worst in the United States where 45% of people are fully vaccinated (whatever that means). South Africa, the place it appears we should have been worried about, currently has only 33% of its population partially vaccinated. And looking at the map above we see that South Africa is one of the better injected countries on its massive continent.

Now look at the map below. The man in the White House campaigned on the promise that he would shut down the virus, and if it weren't for Omicron, our government and media would be celebrating herd immunity within the United States right now. But this virus is not local to the United States, it is of course a worldwide pandemic, and at the current rate we are still years away from when the rest of the world will reach the level of protection that we enjoy here, that is if they ever reach it. That means more years where a potentially dangerous new variant could come out of some poor country and once again scare people back into their homes. If the president wants to shut down the virus then he should not be going along with big pharma by encouraging people to get twice the injections that they should logically need, instead he should be fighting big pharma by demanding that they better allocate their resources for the good of the world rather than the good of their wallets by sending those extra shots to the countries that actually need them, the countries were new, potentially vaccine resistant, variants actually come from. 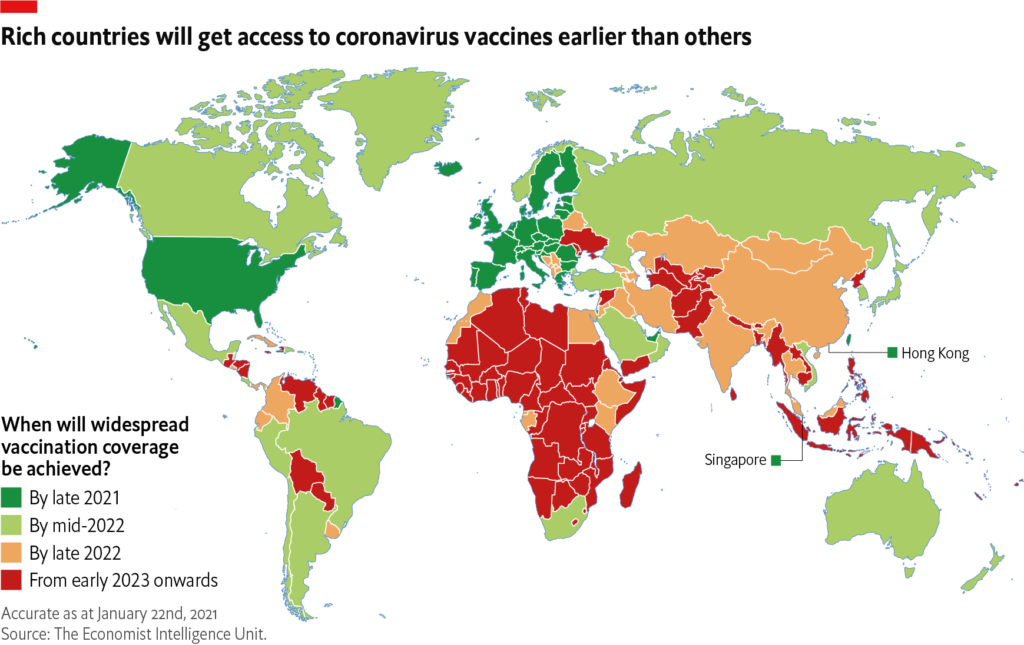 This article would have probably been more persuasive had I stopped right there, but I've been fearmongering and I don't want to encourage fear. If you don't want a covid injection then don't get one (assuming you still have that choice), as long as you have a healthy lifestyle and are free of comorbidities then this virus poses no real threat to you and if you aren't among the healthiest people out there realize that doctors and hospitals have gotten much better at treating this sickness over the past two years so your chance of having a good outcome is ten, if not one hundred times better than it would have been had you gotten the virus back when we knew almost nothing about it. And when it comes to new variants remember that Omicron is now the most dominant strain, but also the most mild, and it is incredibly unlikely for a new variant to evolve to be more deadly. Viruses, like everything else, evolve to have a better chance at survival and a virus that kills its host will die as well, the virus wants us to live so it can live.

We are nearing the end of this pandemic, in fact many of us (myself included) already live as if it is over because we are at a pretty good spot with it now and things will only get better (as long as the government doesn't mess things up). Covid-19 is no longer something that is worth thinking about on a daily basis for people who aren't in the health care industry, if you find yourself constantly stressing about it I encourage you to calm down about it, seek help if necessary, because constantly stressing about something like that which is out of your control is not healthy for you and those around you. Despite all the turmoil in the world, it is still a great time to be alive.

* Note: We are going to do something we don't normally do here which is trust mainstream science and work under the assumption that mass vaccination works like they say it does. Of course this claim, along with that of the general effectiveness of the injection, is under debate but in most cases actually participating in that debate is not something productive which is why this is a topic that I haven't written on and likely won't write more about.

<!--- If you've gotten this far and haven't figured out my stance on it then you aren't very good at reading between the lines ---!>