How the News Hides Good News

And why they do it

So I was watching a video today which featured a CNN headline which read "Survey: More than 80% of Americans 16 and older have immunity" (of course referring to the Corona Virus). This day old article talked about a CDC study (notice how CNN used the word study instead of survey to prime you to think skeptically) which tested blood samples from over 1.4 million Americans and found that 83% of them contained covid antibodies which were gained either from infection or by injection. According to this study we have reached herd immunity to the virus and the pandemic is over (although CNN or even the researchers won't admit that).

Seeing that this was good news that was worth sharing I decided to look it up. Like any normal person I started by using my default search engine which gave me a few things that reported on that study but there wasn't anything coming from a news outlet that people have actually heard of. I then decided to search on Google which reminded me how bad Google is after it showed me articles claiming that herd immunity is impossible alongside only two articles containing what I was looking for. So unsatisfied with those results I did something that I don't recommend doing and went to cnn.com, and when I got to their health section this is what I saw: 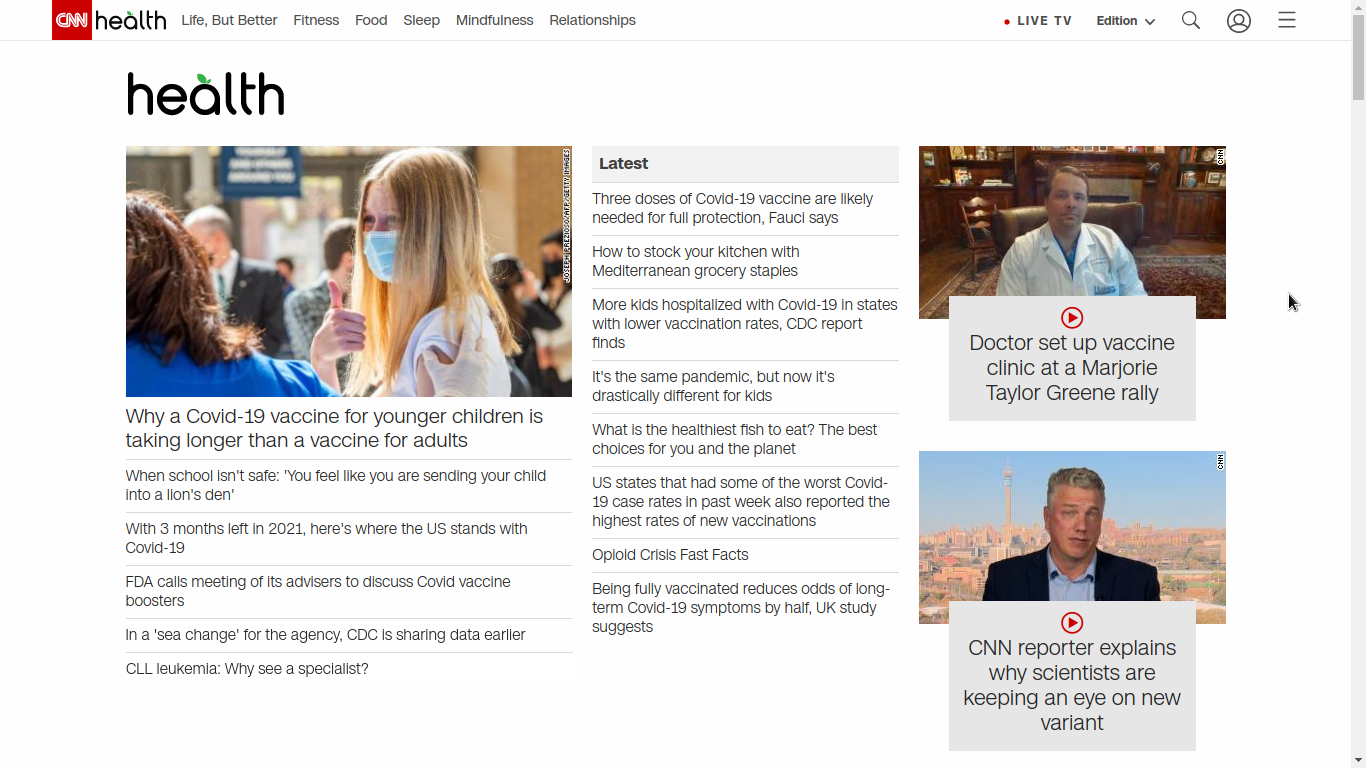 Hardly a single Corona related headline that people coming from all rational viewpoints would agree is positive, and of course no sign of the day old article containing the good news.

So I did what no person should ever have to do and went back to the video I watched, paused it and typed in the URL from the video. Once I hit enter this is the headline I was greeted with, "US states that had some of the worst Covid-19 case rates in past week also reported the highest rates of new vaccinations". I was a bit surprised and for a second wondered if CNN had taken the article down, but then I scrolled down and after passing three small articles I finally found the headline I was looking for. CNN managed to report on good news and hide it at the same time, if we look back at the screenshot I took the article I was looking for was technically there but it really wasn't.

At this point it is quite easy to push all the blame regarding this onto CNN (and the news media as a whole) and how they are pushing certain narratives onto people to get us to think a certain way, but while that is of course true it is unfair to blame all of this on that, there are other factors in play. Take a look at all the headlines on that page, they are all somewhat noteworthy but all quite boring and unimportant but because CNN is the world's largest news company it is expected to report on these small things so what it did was put all of these related small things that all came up on the same day in the same page, this makes sense because it would be hard to fit all those unimportant headlines on their page of more interesting things. Of course it would be more honest of them to be more up-front about what they are doing there by titling the page something like "September 2 Corona Virus Updates" but if they did that nobody would click on it so instead their editor picks the headline that would generate clicks. So then as we see here the editor picks the headline that best fits their narrative and, if possible, is most likely to make people angry since hate gets more views than love, here the chosen headline served more to justify previous anger in some people than to generate new anger but it was the best they had to work with yesterday, the main headline for today's similar page is "Three doses of Covid-19 vaccine are likely needed for full protection, Fauci says" which they also reported on yesterday so they seem to be scraping the bottom of the barrel for content today.

And this whole process is also not CNN trying to shape modern culture by making them always angry or something, it is the result of CNN adapting to the fact that people living in today's culture want to be angry, they don't really want good news. I don't think that society has always been like this but it is certainly like this now. Is social media completely to blame for this problem? Probably not, but it is undoubtably a large factor of whatever the cause of this popular mindset is. But regardless of whatever caused this flaw in modern culture we have to do what we can to fix it because if hate and anger is what is selling our culture is not progressing in the right direction. Find positive media to consume and find ways to produce and promote positive media.