The Ethics of Ad Blocking

There is no good reason not to use an ad-blocker

I'd like to revisit a topic that I touched on in a post from months ago. You may or may not remember this image: 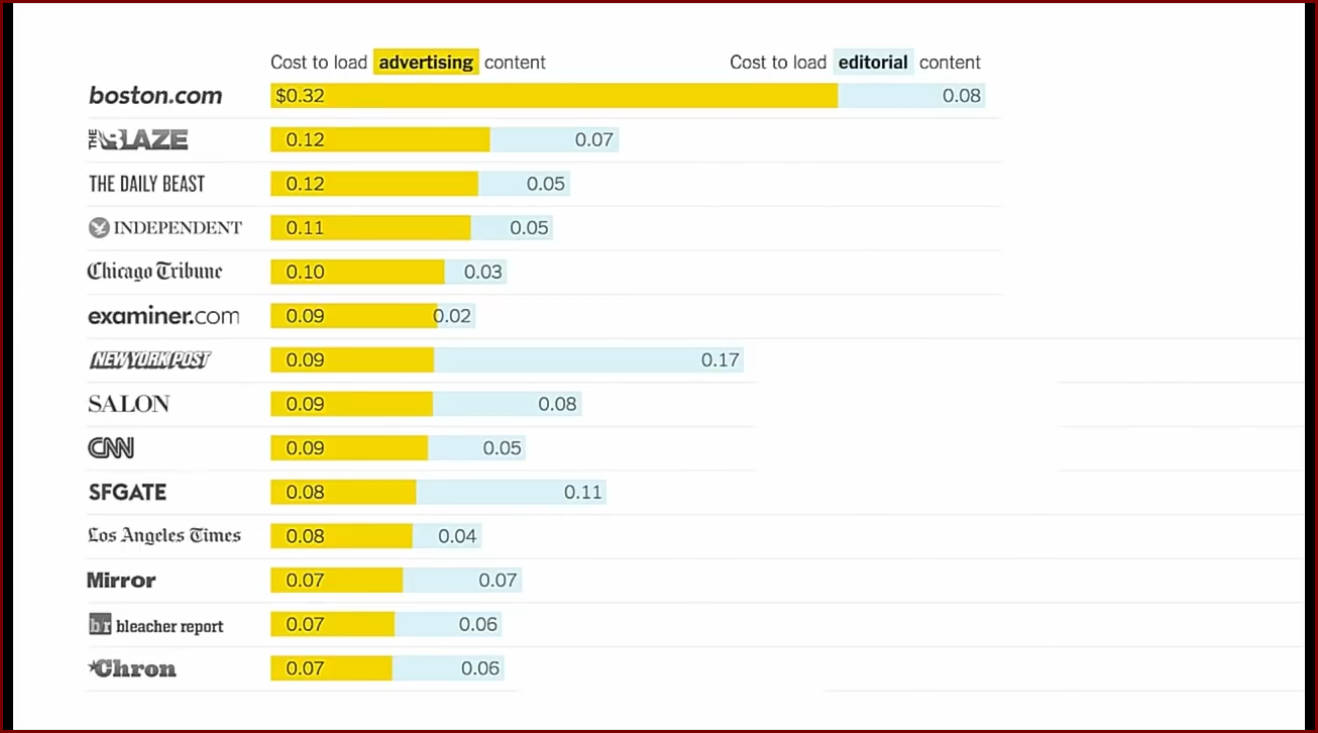 This is a slide which was presented in this tech conference talk titled The Website Obesity Crisis by Maciej Ceglowski which was given back in 2015. Although this talk was targeted at web developers it contains useful information and suggestions for the modern web which we should all follow. The section about ads is the section which highlights one of the biggest problems present on the modern web, the unchecked size of ads. When a web developer allows any random company to display ads on their site they have no control over how large (in bytes) these ads can be, this results in the scenario we see above where on many of the most popular non-video sharing sites it costs more money to load the ads on the site than it does to load the actual content.

But what does this mean? Many of you have good internet connections and unlimited data plans so you probably haven't noticed this at all. If you are one of these people realize that your fast internet access is a luxury, most of the world works off of slow internet. When I was in the Philippines the good internet cafes were the ones where the login page for my email account took less than thirty seconds to load. When you are on a slow metered connection every byte of data counts so you should really want to visit sites which contain a small amounts of data.

To further drive in the point here is a story to show how ridiculous this can be I'll share a story. Yesterday I was at my grandparents' house. The night before they had gone to Red Robin and my grandpa liked the fry sauce there and was wondering how to make it. They knew that they could find anything on the internet so my grandpa started walking towards the computer room with the intent to look it up. I decided to save him the trouble by simply looking it up on my phone but that of course does not solve the problem of their slow internet. There was several seconds between the moment that I told him that I had found it (meaning I'd clicked on the first thing my search engine gave me) and the moment I could actually read the ingredients to them (long enough for my grandma to doubt that I actually had found it).

While it is easy to put the blame of this delay onto my grandparents' slow internet it is not the fault of their internet at all. The ingredients to Red Robin fry sauce are mayo, barbecue sauce, and chipotle powder. How much data would have to be sent in order to communicate that? Less than a kilobyte, how much data was being sent to my phone when I loaded that page? I didn't actually measure, but having some background knowledge in these type of sites I can say that it was at least 20 megabytes, over 200 times the amount of data that needed to be sent, and it is important to note that the term at least implies that there could have been much much more. Now let's say that you want to have a bit more than just the ingredients with your recipe, this video demonstrates how a detailed recipe with high quality pictures can be presented using only one megabyte of data. There is no logical reason for websites to be as big as they are. The web developers and advertisers are completely to blame for the long delay that my grandparents, and millions of others with bad internet, have to endure whenever they look up a recipe or some other simple thing.

What we can do to fight this problem

There are two things we can do to avoid long load times for web pages like these, the first and simplest is to simply not use bloated sites, look for minimal sites like the one you are on right now. My entire website takes up less than ten megabytes of space every page should have no problem loading fast because they are all so small.

But of course with the current state of the internet this is not always possible, so the next best thing to do is to use an ad-blocker. The easiest way to do this is by using the Brave web browser, Brave is a privacy respecting open source web browser that has a fairly powerful ad-blocker enabled by default so you don't have to install any third party ad-blocking extensions that may just be viruses in disguise. Here is another slide from Ceglowski's presentation: 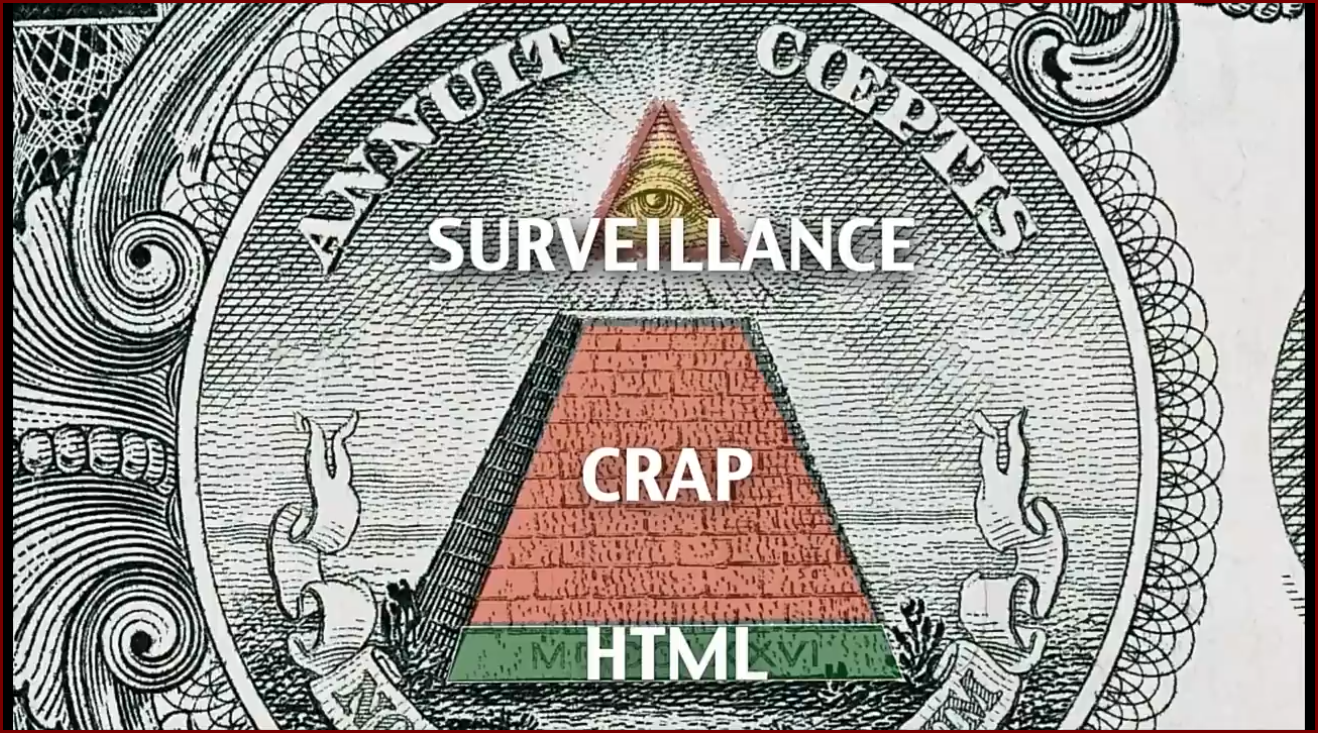 This picture represents most of what is being loaded by your standard browser when you open a typical website. The only part of that pyramid that you actually need is at the base layer. When you use Brave it tries to get rid of as much of the surveillance as possible and it cuts out a good chunk of the crap. You will still have some of it come through but it will be far better than being forced to load several megabytes of ads that you don't want to look at anyways.

The Ethics of Ad-Blockers

Many opponents to ad-blockers say that we shouldn't block ads because if we do the websites we visit won't get paid. As someone who pays a monthly bill to keep their website up I understand this argument but it does not change my mind. If we look back at the graph at the top of this page we see that advertisers are incredibly wasteful in terms of internet bandwidth, and if you have an understanding of how the web works economically you'll understand that it is you the consumer who pays the price for wasteful bandwidth, not the people responsible for the waste. Over time you will have to pay more via your internet bill than these sites would ever get by you using them as they were designed (besides websites make their money by stealing and exploiting your personal information these days).

Now what if you want to support the sites you visit without contributing to the wasteful use of bandwidth? Brave has the answer for this as well. When you are using Brave you have the option to opt-in to viewing ads through the Brave platform and if you are visiting a site like mine that has allowed Brave to serve ads you will occasionally be given ads in the form of desktop notifications. These notifications take up very little bandwidth and are easy to ignore but both you and the website you are visiting will be compensated for allowing that ad to be shown to you. Feel free to look into the Brave rewards program if you want to know more.

Traditional ads on the internet take advantage of your attention, your bandwidth, your money, and in some cases your entire computer since a few of them lead to actual viruses when clicked. If you want to support sites by viewing ads than the Brave method is the only ethical and sustainable way for that to happen. Now that I know what it is like to live with an ad-blocker I can't imagine life without one. Every time I have to go without one I am shocked by the amount of garbage people let onto their websites and people load into their browsers. You can and should browse the internet without having to see any of this junk, there is no good reason not to use an ad-blocker.

A note about Brave shills

If you go back in time a year or so you'd find that a lot of people were shilling for Brave. During that time Brave had an incredibly generous affiliate marketing program which paid their affiliates a decent sum for each person who downloaded Brave using their link. Because of this Brave has gained a whole lot of skeptics who believe it is a scam. This affiliate program stopped accepting new affiliates seven or eight months ago and this year Brave no longer pays creators for people who use their old affiliate links. I have never had an affiliate link so the only compensation I would receive from you using brave would would be through you viewing their ads while on my site and this compensation would likely be nowhere near the amount that many of the affiliates from the old program received. I have been using Brave for several months now and I would not be recommending it to you if I did not think it genuinely was the best browser for any average person.