The future that is already here 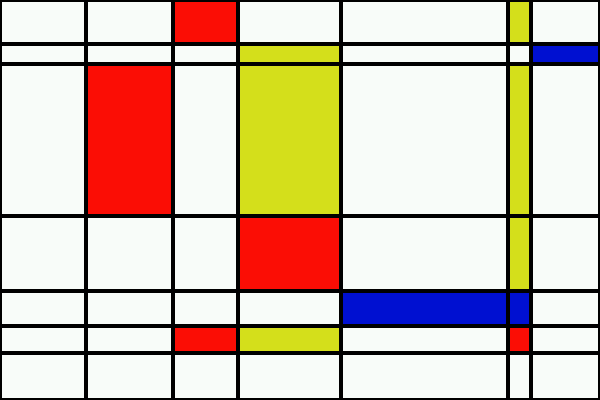 Shown above is a piece by the early 20th century Dutch painter Piet Mondrian. Mondrian is among the fathers of abstract art along with cubism and his inspirational paintings, like the one above, continue to be studied by aspiring artists and historians to this day as his minimalist paintings marked a turning point in art. The question that many connoisseurs of art began to ask was, "How much can be expressed with little detail?" rather than, "How much detail can we express?" Mondrian must have spent hours making sure he had precisely the right shades of blue, yellow, and red and that he chose exactly the right squares to fill with the given colors so that gallery visitors would be filled with awe and wonder as they interpreted the emotions that he had laid out on that canvas. As we can tell from the sample above, Mondrian was truly a master at his craft.

Wait no, the picture above is not a famous Mondrian piece, it was generated by a computer in under a second using a program that I spent an hour and a half writing for fun the other day. Here are a few more: 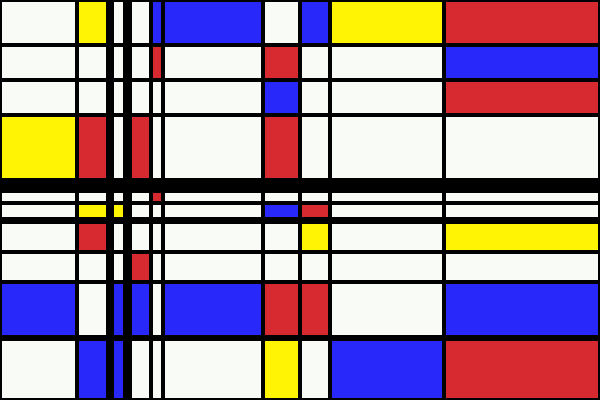 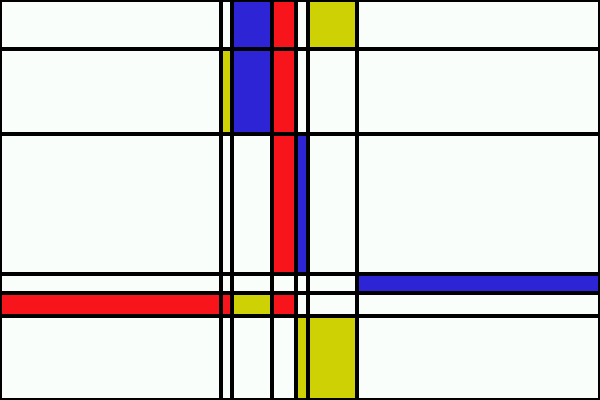 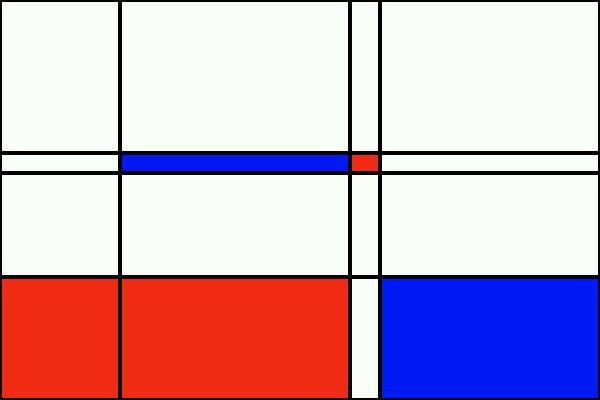 In fact here are 100 more, and here's another bunch more set to some music by Bach in a video I made for no reason other than the fact that I could, heck I could write a program to completely automate making videos like that too. (I'd probably only need ten more lines of code)

I'm sure it would not be terribly hard to find someone gullible enough to believe that these are actually genuine Mondrian paintings, all you'd need is someone to claim they have a PHD that speak authoritatively and uses big words and you're set. In fact you'd probably have a harder time finding skeptics these days than believers. Heck you could probably even find people with actual PHDs to play along. I remember either watching a video or reading an article (I wish I could actually find the source to link here and so I could use actual names) where an art professor at a well respected college explained that on the first day of class he would put an image up on the projector and he'd tell them that it was a picture of a painting by one of the famous abstract painters who worked around the same time Mondrian did. He would then give his students a few minutes to analyze the painting and he'd let them explain the emotions and ideas that they felt the artist was trying to convey. After giving his students time to think and time for a few of them to speak, he'd pull out his smock to show his students that the painting they were putting so much effort into analyzing was not a painting at all, but rather it was a picture of his dirty smock.

I don't entirely remember what lesson that professor wanted people to get out of that, but the lesson I got from it was that you can convince just about anyone that just about anything is art. Artists are beginning to become obsolete, this is a topic that I've touched on in the past. It took me less than two hours to write a program that could make more Mondrian imitations in a few minutes than Mondrian himself could have made in his life. And while nobody has invented an oil painting robot yet, it is only a matter of time before some random professor decides to spend the taxpayer dollars he was allocated on building one.

Computer generated art is not the future, it is already here. Minecraft is the world's most popular video game, and while it is still actively being developed it barely employs any artists because the bulk of Minecraft's beautification of it is done with an algorithm. There exist entire Reddit threads dedicated to showing off the beautiful "naturally generated landscapes" of Minecraft. These people are looking at art that was made by a computer rather than a human. Minecraft isn't the only game like this. Several video game developers have ditched the concept of level design and map making and opted to have a computer do it for them, often times procedurally generating a unique world for each individual player to explore.

Unfortunately the fine art community has yet to embrace this, many of these people view Mondrian's work as sacred and the png files that my program outputs as abominations (I wonder what Mondrian himself would think of my program). Their culture, in fact their entire system, is not equipped to handle the future that is already here. Computer generated worlds, images, and personalities are already here, it is only a matter of time before we have good computer generated film and music. The idea that the world's entire entertainment industry could fall into the hands of a few AI overlords doesn't sound all that far fetched. And most people won't even care since they can't tell the difference between a Mondrian painting and a random collage of shapes a computer spat out.